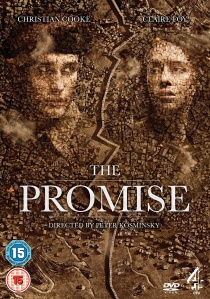 Written by BAFTA award-winning Director Peter Kosminsky (Warriors and The Government Inspector), The Promise is an inspiring depiction of political injustice experienced in modern day Israel and the old state of Palestine in the Second World War. Packed with special features and DVD extras, the inspiring Channel 4 drama and boxset by acclaimed Writer and Director Peter Kosminsky are out to own on 28th February 2011 from 4DVD.

Just as 18-year-old Londoner Erin (Foy) sets off to spend summer in Israel with her best friend, Eliza (Weeks), she unearths an old diary belonging to her seriously ill grandfather, Len (Cooke). Intrigued by the life of this old man she barely knows, Erin takes the diary with her, and is stunned to learn of his part in the post-WWII British peace-keeping force in what was then Palestine.

Left to her own devices when Eliza begins National Service in the Israeli army, Erin witnesses the complexities of life - for both Jews and Arabs - in this troubled land. As Len's story comes to life from the pages of the diary, Erin discovers the disturbing truths about his time in Palestine and the atrocities he witnessed in the 1940s.

A tale of political conflict and the devastation of a nation, The Promise sees Erin retrace Len's steps in a heart breaking journey to understand and fulfil a promise made by her grandfather over 60 years ago.

An authentic testimony of British soldiers, Israelis and Palestinians, The Promise portrays the tempestuous nature of modern Israel and its politically-charged past.

HotBD
Two of Britain's most notorious brothers The Krays were taken on by another famous pair of siblings The Kemps in Peter Medak's big screen gangster biopic set for a Limited Edition Blu-ray release from Second Sight Films on 12th July 2021. END_OF_DOCUMENT_TOKEN_TO_BE_REPLACED
Top PicksView