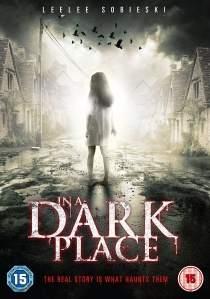 News
News Article Go back to homepage
The real story is what haunts them. Based on the "Turn of the Screw" by Henry James, starring Leelee Sobieski and Tara Fitzgerald, In A Dark Place is released on DVD By High Fliers on 18th March 2013.
Chris Bearne, Graham Pountney, Gabrielle Adam, Christian Olson, Tara Fitzgerald, Leelee Sobieski
Donato Rotunno
Eddy Géradon-Luyckx, Peter Graham, Yarek Danielak, Andreas Bajohra
High Fliers
1 hour 35 minutes
18/03/2013
Thank you for supporting DVD365.net when you order using the link(s) below. As an Amazon Associate we earn from qualifying purchases
Buy DVD
Information

The real story is what haunts them. Based on the "Turn of the Screw" by Henry James, starring Leelee Sobieski (Public Enemies, Night Train, 88 Minutes) and Tara Fitzgerald (Brassed Off, Waking The Dead), In A Dark Place is released On DVD By High Fliers on 18th March 2013.

Anna Veigh, (Leelee Sobieski) takes a new job as a nanny to two young orphans. Her new workplace is a remote country estate with beautiful grounds. Miles and Flora, the children, seem sweet and charming.

This perfect world quickly fades as she makes disturbing discoveries. Anna learns her predecessor in the job died in suspicious circumstances. Adding to her unease, Anna begins to catch glimpses of figures lurking in the grounds which she later learns are those of two ex-employees who are now dead. The figures have sinister intentions and soon the lives and souls of the children will be in jeopardy. Anna is forced to confront dark secrets buried deep in her own psyche as she fights to cleanse the children's souls of darkness.