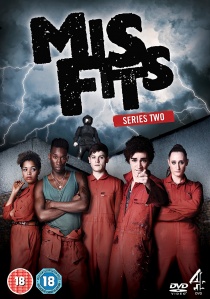 The second series of E4's BAFTA- winning smash hit drama Misfits is available to own on DVD - including exclusive behind the scenes footage - on 27th December 2010 from 4DVD.

A freak storm left our posse of social outcasts with super powers; Curtis can turn back time, Kelly can read minds, Simon can turn invisible and Alisha can send people into a sexual frenzy with just one touch. Then there's their two dead probation workers (one is buried under the local environmental monitoring station; the other stored in a freezer in the community centre). And finally, unbeknownst to the others, Nathan is trapped six feet under in a coffin, immortal and very much alive.

But it's not just the ASBO Five who were affected by the storm. With the super-charged local townsfolk going the way of Gotham City, this series sees our gang faced with a whole new world of weird and wild characters. Who is the masked, hooded stranger who seems to be watching their every move? A force for good or an evil arch-nemesis intent on bringing about our gang's destruction...?

With 30 minutes of exclusive behind the scenes footage, this is a must-have DVD for any Misfits fan.