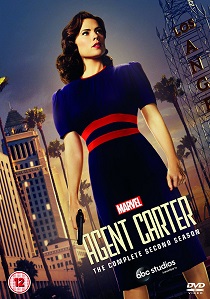 Bigger, bolder and brighter than the white-hot lights of 1940s Hollywood, Marvel's Agent Carter, released on DVD and Blu-ray by Walt Disney Studios Home Entertainment on 5th December 2016, blazes back for a second season packed with action, humour and intrigue!

In the wake of World War II, top SSR (Strategic Scientific Reserve) agent Peggy Carter (Hayley Atwell) is dedicated to stopping new, Atomic Age threats. Blessed with brains, beauty and formidable fighting skills, Peggy trades the lampposts of New York City for the palm trees of Los Angeles to crack a baffling case with her partner in crime-fighting, Edwin Jarvis (James D'Arcy): A body has just been discovered in a frozen lake... during a heatwave. When this bizarre phenomenon is traced to Isodyne Energy, the mystery deepens, exposing a shocking conspiracy and the revelation of a substance that could end life as we know it-once it falls into the hands of actress-turned-mad-scientist Whitney Frost.

BD
A 13-year-old girl named Meilin turns into a giant red panda whenever she gets too excited in Disney and Pixar's 25th feature film Turning Red, released on DVD, Blu-ray and 4K UHD 2nd May 2022 from Walt Disney Home ... END_OF_DOCUMENT_TOKEN_TO_BE_REPLACED
Top PicksView