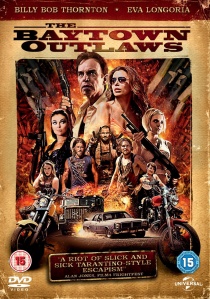 Writer-director Barry Battles (along with co-writer Griffin Hood) wears his love of cinema on his sleeve with this violent and breathtakingly-paced road-romp through the Deep South, dishing out references to the likes of Rambo, The Warriors, The Devil's Rejects, The Terminator and even E.T. as the bullets fly and the body count mounts. Throw in Eva Longoria looking amazing in a vest-top and a pair of Daisy Dukes and a rocking soundtrack that includes the likes of Clutch, Lynyrd Skynyrd and Grace Potter and the Nocturnals, amongst others and you have one hugely entertaining ride that is destined for cult status.

Meet the Oodies, a trio of redneck hillbilly brothers whose main source of fun - and only source of employment - is illegally enforcing several unwritten laws on behalf of the local corrupt sheriff. When their latest job goes disastrously wrong and ends in a massacre at the wrong address, the brothers are approached by Celeste, a witness to the mayhem, with a proposal. She's willing to pay them $25,000 for the safe return of her godson, who has been kidnapped by her ex-husband. What she fails to tell them is that the man in question is a ruthless mobster who believes Celeste is dead, having previously arranged for one of his goons to pump her full of lead.

Unsurprisingly, what should be a simple rescue mission soon turns into a southern fried battle royale of epic proportions as the brothers fall foul of a seemingly endless parade of psychopaths and miscreants who want them dead, ranging from a gang of crazy-ass biker chicks and a pack of ruthless road warriors to Federal agents, crooked cops and some very angry Native Americans.

BD
After more than thirty years of service as one of the Navy's top aviators, Pete 'Maverick' Mitchell is back where he belongs as Top Gun: Maverick flies onto DVD, Blu-ray and 4K UHD 31st October 2022 from Paramount Home ... END_OF_DOCUMENT_TOKEN_TO_BE_REPLACED
Top PicksView