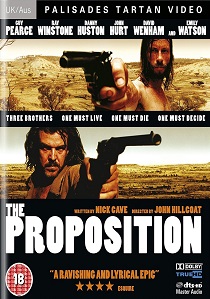 Nominated for 12 Australian Film Institute Awards in 2005 and winner of the Gucci Prize for Best Screenplay at the 2006 Venice Film Festival, The Proposition, released on Blu-ray on 2nd November 2009 from Palisades Tartan, reunites Ghosts Of The Civil Dead director John Hillcoat (The Road) and screenwriter and musician Nick Cave for the first time since their memorable 1988 collaboration.

Cave's 19th-century tale begins with the proposition of the title, as Captain Stanley (Ray Winstone) captures fugitive brothers Charley (Guy Pearce) and Mikey Burns (Richard Wilson) at a scene of bloody rape and murder. Informing Charley that he must kill his older brother, Arthur (Danny Huston), in order to be set free, Stanley drags Mikey to a decrepit jailhouse while he waits for Charley to carry out the deed.

Hillcoat's Western reeks of the dry desert heat, with flies buzzing, temperatures soaring, and emotions spiralling out of control. Along with cinematographer Benoit Delhomme, Hillcoat creates a mesmerising vision of the Australian outback with a film that is peppered with brutal jolts of unremitting violence, As well as writing the screenplay, Nick Cave also teamed up with Bad Seeds and Grinderman cohort Warren Ellis to provide the film's atmospheric soundtrack.