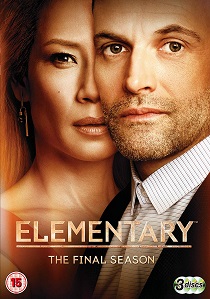 The final season of Elementary, released on DVD 21st October 2019 from Paramount Home Entertainment, finds Holmes returning to the place where Sherlock's storied legend began - London. Having lied and confessed to a murder he did not commit - to protect Watson's good name - Sherlock moved back to England to avoid jail time.

Loyal Dr. Joan Watson followed him across the pond, where the detective duo jump right into more intriguing cases and encounter a slate of clever criminals, relentless adversaries and at least one old nemesis. Back in New York, Captain Thomas Gregson (Aidan Quinn) and Detective Marcus Bell (Jon Michael Hill) feel the absence of their former consultants, but it may not be too long before unorthodox crimes and common enemies bring the foursome back together.

Witness the unique evolution of this classic team and hit series in The Final Season on 3 discs.

DVD
Packed with twists and turns from beginning to end, starring Matt Damon and directed by Academy Award winner Tom McCarthy, Stillwater is available to own on Blu-ray and DVD 6th December 2021 from Universal Pictures (UK). END_OF_DOCUMENT_TOKEN_TO_BE_REPLACED
Top PicksView