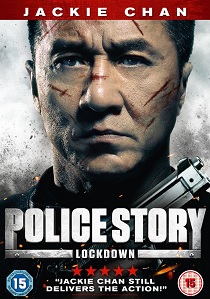 Action icon Jackie Chan (Rush Hour, Shanghai Knights, The Karate Kid, The Forbidden Kingdom) returns to one of his most famous franchises in the fast-paced, breathtaking action-thriller Police Story: Lockdown, released on DVD and Blu-ray by Kaleidoscope Home Entertainment on 25th July 2016.

Police Captain Zhong Wen (Chan) knows all about sacrifice. He's always been too busy chasing bad guys to be a father to his daughter, Miao. Tonight however, he's seeing her for the first time in years, and meeting her fiance, club owner, Wu Jiang (Liu Ye, Curse of the Golden Flower).

But, Wu has a dark side, and a secret score to settle with his soon-to-be father in law, and plans to take Zhong, Miao and the whole club hostage. Only Zhong can avert the carnage, but is he willing to risk everything to stop this night going down in history?