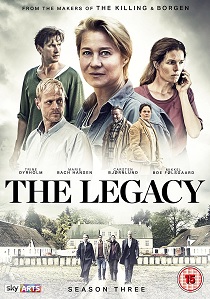 NewsTV SeriesDrama
News Article Go back to homepage
The Legacy, the character-driven drama series about what it means to be a family in a day and age where the classical family patterns have undergone radical change, returns for a third series on DVD on 29th May 2017 from Arrow Films.
Marie Bach Hansen, Mikkel Boe Følsgaard, Smilla My Dahl Hougaard, Trine Dyrholm, Carsten Bjørnlund
Heidi Maria Faisst
Karoline Leth
Arrow Films
8 hours 23 minutes
29/05/2017
#TheLegacySeason3
Thank you for supporting DVD365.net when you order using the link(s) below. As an Amazon Associate we earn from qualifying purchases
Buy DVD
Buy BD
Information

Signe (Marie Bach Hansen) has big visions and plans to expand her farm with a neighbouring farmer. Emil (Mikkel Boe Følsgaard) has moved into Grønnegaard where he among other things takes care of Thomas' and Isa's daughter Melody (Smilla My Dahl Hougaard). Gro (Trine Dyrholm) challenges the Art Center's conventional thinking and discovers new sides of herself. Frederik (Carsten Bjørnlund) is a success abroad and is hardly ever home, until he has to dive into a complicated investigation filled with emotions.

The final season is marked by a landmark event, which forces the four siblings to consider what they want with their lives, and whether they want to do good for the world and for their community.

The Legacy is produced by DR Fiktion - the production house that also created The Killing and Borgen. The critically acclaimed drama was developed by Palm D'Or winner Pernilla August, who also directed Episode 9, and created by author Maya Ilsøe.

HotDVDBDDIGITAL
With stunning revelations, glamorous journeys, and the arrival of the Jazz Age, Downton Abbey: A New Era, released on DVD and Blu-ray 15th August 2022 from Warner Home Video, will be the Crawleys' biggest adventure yet as they grapple with their future and new intrigue about ... END_OF_DOCUMENT_TOKEN_TO_BE_REPLACED
Top PicksView