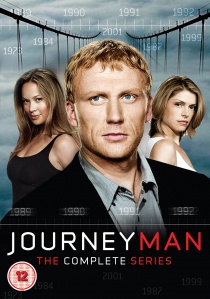 Kevin McKidd (Rome) plays newspaper reporter and family man Dan Vassar. Happily married to Kate (Gretchen Egolf; The Talented Mr Ripley) with a young son Zack, life is pretty good for him right now. But things are set to change when he inexplicably starts to jump backwards through time. He uses his newfound powers to change the destiny of people he encounters, but sometimes with consequences.

Dan's time travelling starts to effect his family life and his work and his brother Jack (Reed Diamond; 24), a police detective becomes suspicious of his strange behaviour. When his jumps reunite him with his long lost fiancée Livia (Moon Bloodgood; The Sessions), who had supposedly died in a plane crash, the mystery deepens and present day life becomes even more complicated.

This time travelling gem is a must see.

DVD
Sam Mendes, the Oscar®-winning director of Skyfall, Spectre and American Beauty, brings his singular vision to his World War I epic, 1917 to DVD, Blu-ray and 4K Blu-ray 18th May 2020 from ... END_OF_DOCUMENT_TOKEN_TO_BE_REPLACED
Hot PicksView