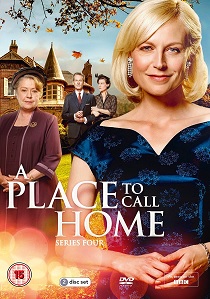 Marta Dusseldorp leads the cast in the fourth series of A Place to Call Home, the sweeping romantic drama set in 1950's rural Australia, released on DVD by Acorn Media on 6th March 2017.

The series follows the lives of the Blighs, a wealthy and complicated pastoralist family, who live in Inverness, NSW. With George now married to Regina, Sarah is seemingly separated from him forever but still they struggle to move on from the deep love that they feel for each other; Anna and Gino's new marriage is tested again; Jack tries to prove to Carolyn, full of self-doubt, that she's worthy of him; and Elizabeth shocks the family with her new attitude to life.

The story unfolds against the backdrop of the conservative wave of fear generated by the "Reds Under the Beds" scare surrounding The Petrov Affair, but also the wave of liberal change that has opened up new social and moral choices.

This DVD Set includes all 12 episodes of the fourth series - A Nagging Doubt, Bad in a Good Way, When You're Smiling, Home to Roost, Happy Days Are Here Again, The Trouble With Harry, You're Just in Love, There'll Be Some Changes Made, Where Will the Baby's Dimples Be, And the Blind Shall See, Catch the Tiger and All Good Things.