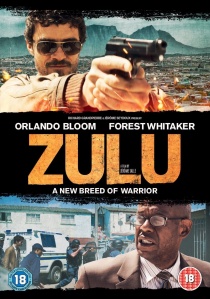 When a teen girl is discovered brutally murdered in Cape Town's botanical gardens, Chief of Police Ali Sokhela (Academy Award Winner Forest Whitaker; The Last King of Scotland) and cop Brian Epkeen (Orlando Bloom; The Hobbit; The Lords Of The Rings) are tasked with solving the crime. However upon investigating the murder they uncover a sinister synthetic drug ring with a worldwide network, releasing a new illegal substance into the market, which is spiralling out of control. Sokhela and Epkeen are soon placing their own lives in danger in an attempt to end further devastating and disturbing consequences.

Directed by Jérôme Salle, the 2013 Official Cannes Selection Zulu is released on DVD and Blu-ray by Anchor Bay Home Entertainment on 19th January 2015.