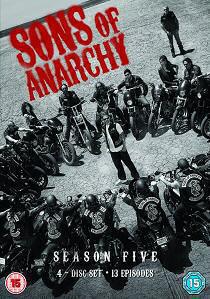 Take a seat at the head of the table with Jax in the most illicit and violent season to date, when TV's darkest and adrenalised drama returns for its brutal fifth season. Relentless and utterly addictive, Sons of Anarchy: Season 5 powers onto Blu-ray and DVD 25th November 2013 from Twentieth Century Fox Home Entertainment.

From the creative genius of Kurt Sutter, Sons of Anarchy is a dark and gritty thriller with comedic undertones. The hit US thriller tells the story of SAMCRO, a notorious outlaw motorcycle club intent on protecting their sheltered small town against encroaching drug dealers, corporate developers and overzealous law officers. The club is equally determined to protect their ruthless and illegally thriving arms business, and stops at nothing to do so.

Under Jax's new stewardship SAMCRO is forced to deal with the mess Clay has left. With an ever widening network of criminal activity, SACRO find themselves now in battle with their one time allies the African-American gang the One-Niners. To compound problems, Oakland's biggest crime boss (Harold Perrineau) comes to Charming to seek revenge after his daughter was accidentally run down by Tigg. Opie meanwhile begins to question what he could become if he stays with SAMCRO and Clay finds the club he used to run now turning on him forcing him into a collision course with Jax.

This season Sons of Anarchy goes to even darker places with the series of feuds threatening to spiral out of control, leading to one member's loyalty to SAMCRO tested to the extreme. Sons of Anarchy Season 5 roars onto Blu-ray and DVD with exclusive creator cut episodes and extras.

3D-BD
After escaping an attack by what he claims was a 70-foot shark, Jonas Taylor must confront his fears to save those trapped in a sunken submersible as The Meg arrives on DVD, Blu-ray, 3D Blu-ray, 4K ... END_OF_DOCUMENT_TOKEN_TO_BE_REPLACED
Hot PicksView