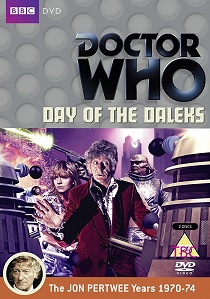 NewsTV SeriesScience FictionFantasyJon PertweeBBCDoctor Who
News Article Go back to homepage
Starring Jon Pertwee as the Third Doctor, Doctor Who: Day of the Daleks sees our hero fighting the deadly Daleks as they invade Earth. Packed with a wealth of unmissable extras it will be released on DVD from 2entertain on 12th September 2011 as a two-disc box set.
Jon Pertwee, John Levene, Richard Franklin, Aubrey Woods, Katy Manning, Nicholas Courtney
Paul Bernard
Steve Broster, Barry Letts
2entertain
1 hour 36 minutes
12/09/2011
Thank you for supporting DVD365.net when you order using the link(s) below. As an Amazon Associate we earn from qualifying purchases
Buy DVD
Information

World peace hangs in the balance and Sir Reginald Styles, a high-ranking diplomat, is the only person that stands between mankind and a third and final World War. But a mysterious and savage guerrilla force from the 22nd Century believe Styles is the agent that shaped their terrifying future and therefore must die...

The Doctor and Jo find themselves flung into the guerrillas' world; a brutal dictatorship policed by the merciless and ape-like Ogrons. The Daleks have invaded Earth, enslaved the population and face certain triumph unless the Doctor betrays all he believes in and condones the cold-blooded murder of Styles in an attempt to change the course of history... forever.

Related Articles
Whodunnit: Series 1, Will Any Gentleman..?
Doctor Who: The Web of Fear
Comments
Hot Pick