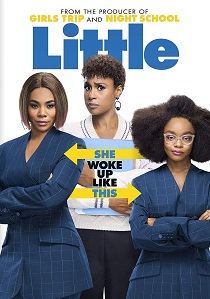 NewsComedy
News Article Go back to homepage
In Little, arriving on DVD 19th August 2019 from Universal Pictures (UK), a woman is transformed into her younger self at a point in her life when the pressures of adulthood become too much to bear.
Justin Hartley, Marsai Martin, Regina Hall, Issa Rae, Tone Bell, JD McCrary, Luke James
Tina Gordon
Kenya Barris, James Lopez
Universal Pictures (UK)
1 hour 39 minutes
19/08/2019
#Little
Thank you for supporting DVD365.net when you order using the link(s) below. As an Amazon Associate we earn from qualifying purchases
Buy DVD
Information

Girls Trip's Regina Hall and Black-ish's Marsai Martin both star as Jordan Sanders - Hall as the take-no-prisoners tech mogul adult version of Jordan and Martin as the 13-year-old version of her who wakes up in her adult self's penthouse just before a do-or-die presentation.

Insecure's Issa Rae plays Jordan's long-suffering assistant April, the only one in on the secret that her daily tormentor is now trapped in an awkward tween body just as everything is on the line. Little is an irreverent new comedy about the price of success, the power of sisterhood and having a second chance to grow up - and glow up - right.

Will Packer, blockbuster producer of Girls Trip, the Ride Along franchise, and ten movies that have opened No. 1 at the U.S. box office, including Night School, No Good Deed and Think Like a Man, brings an all-new perspective to the body-swap comedy.

HotBD
Combining the bio-horror elements of his earlier films whilst anticipating the technological themes of his later work, Videodrome, released on Blu-ray from a restored high-definition digital transfer by Arrow Films on 7th December 2015, exemplifies Cronenberg's extraordinary ... END_OF_DOCUMENT_TOKEN_TO_BE_REPLACED
Top PicksView