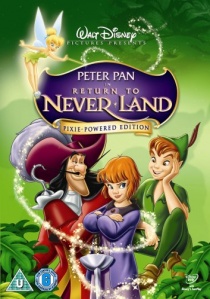 The boy who never grew up is back to face his arch enemy, Captain Hook, in a tale of dastardly plots and daring escapes. Peter Pan - Return to Never Land, released by Walt Disney Studios Home Entertainment on 16th June 2008, is another Disney adventure based on the J M Barrie treasured tale Peter Pan. Available exclusively as a special pixie-powered Disney DVD for a limited time only, the film sees Peter joined by Jane, the daughter of his former cohort, Wendy, to once again save the whole of Never Land.

This captivating release will delight children and remind even the most hardened adults that imagination is a powerful magic, and anything can happen with faith, trust and a little pixie dust!

The story re-joins the cast in London during World War II. With her husband away fighting in the war, Wendy, attempts to brighten up her children's lives with fantastical tales of Peter Pan and the Lost Boys.

Sceptical Jane refuses to believe her mother's stories are anything other than fantasy until Captain Hook shows up and whisks her away to Never Land! The pesky pirate sets in motion a plan using Jane as bait to lure Peter Pan and his fairy friend, Tinker Bell, into his evil clutches. Jane must overcome her cynicism and believe in the power of magic before Tinker Bell's light goes out and the Lost Boys are lost forever.

HotUHD
A decade-defining classic from the imagination of Steven Spielberg and Chris Columbus, celebrating its 35 year anniversary, The Goonies is released on 4K UHD 31st August 2020 from Warner Home Video. END_OF_DOCUMENT_TOKEN_TO_BE_REPLACED
Top PicksView