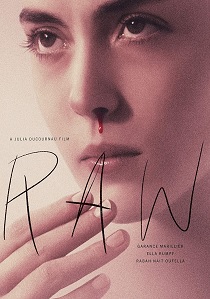 Get ready to tuck into a meaty treat with Raw, the deliciously dark tale of a strict vegetarian who discovers a taste for human flesh after heading to a brutal veterinary college where initiation ceremonies are the norm. Second Sight has cooked up a special Limited Edition Blu-ray of this horror hit due to be dished up on 19th April 2021.

Julia Ducournau's shocking feature film debut was acclaimed by critics after a barnstorming debut at Toronto International Film Festival, where paramedics had to be called after audience members fainted at the film's premiere. Now, after wowing audiences on its initial release, Second Sight has pulled the Raw ingredients together for a lip-smacking Limited Edition release packed full of extras and served up in a sumptuous rigid slipcase with a booklet containing essays and interviews and three collector's art cards.

Shy student Justine (Garance Marillier, due to make her English language debut in sci-fi thriller Warning alongside Alice Eve), heads to a veterinary school and is subjected a tough series of hazing rituals from fellow students. And it's even tougher for vegetarian Justine as she is covered in blood and forced to eat raw meat. But after tasting the flesh, Justine finds herself craving even more meat - and it doesn't matter if it's animal or human as her uncontrollable desires lead to a horrific outcome.

Second Sight has produced a sumptuous buffet for your delectation, with new features on the menu including interviews with star Garance Marilier and producer Jean des Forets, a new commentary from critic Alexandra West, as well as interviews and commentaries from Julia Ducournau and plenty more, this is a dish that tastes as good as it looks.

Sink your teeth into Raw, a delectable, meaty treat.

DVD
Packed with twists and turns from beginning to end, starring Matt Damon and directed by Academy Award winner Tom McCarthy, Stillwater is available to own on Blu-ray and DVD 6th December 2021 from Universal Pictures (UK). END_OF_DOCUMENT_TOKEN_TO_BE_REPLACED
Top PicksView