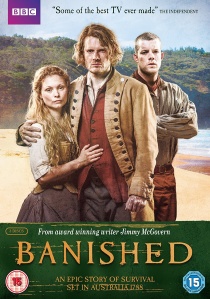 From EMMY award-winning writer Jimmy McGovern (The Street, Cracker, The Accused) comes the Banished, the new BBC Two drama based on the founding of Botany Bay in Australia, released on DVD by BBC Worldwide on 20th April 2015.

In 1787 Britain banished its unwanted citizens - orphans, petty thieves, prostitutes and highwaymen - to Sydney, Australia. Among the first convicts are close friends Elizabeth Quinn (MyAnna Buring, Ripper Street) and Tommy Barrett (Julian Rihind-Tutt, The Hour), who are engaged in an illicit relationship, and their friend James Freeman (Russell Tovey, Him & Her).

When Tommy and Elizabeth's relationship is revealed to those in charge, it sets in motion a series of events that forces the pragmatic, idealistic Governor Phillip (David Wenham, Top Of The Lake) into further opposition with his nemesis Major Ross, a man who thinks the only chance of survival is to rule with an iron fist.

DVD
In The Undoing, released on DVD and Blu-ray 22nd March 2021 from Warner Home Video, a chasm opens up in the seemingly perfect life of a successful therapist: a violent death, a missing spouse, and a ... END_OF_DOCUMENT_TOKEN_TO_BE_REPLACED
Hot PicksView