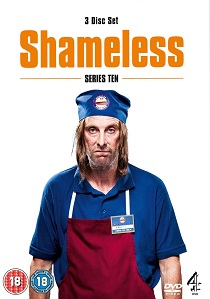 The unthinkable has happened - the Department of Work and Pensions have finally caught up with job dodger Frank. He finds himself in a nightmare fantasy on death row, he's a 'dead man walking' to... a job! Welcome back to Shameless - Series 10, out to own on DVD from 20th May 2013, courtesy of Channel 4 DVD.

Unbelievably Frank (David Threlfall) thrives in his new job at World of Burgers and he wins the respect of his fellow employees. But Frank's new boss Wesley (John Bradley) has got it in for him and hatches a plan to get shot of the former scrounger.

Meanwhile Frank's fellow Chatsworth Buccaneers are up to their usual dodgy tricks. Shane (Nicky Evans) and Jackson (Emmanuel Ighodaro) launch a bootleg booze scam; Avril (Karen Bryson) uses her new job in a pharmacy to become the local supplier of prescription drugs; Aiden (Robbie Conwa) and Chesney (Qasim Akhtar) get stuck with a live cow; a guilt-ridden Shane starts stalking the family of the man he's killed and desperate Gloria (Angeline Ball) turns to Dom (Stephen Lord) when she gets into trouble with a loan company.

New relationships form and existing ones are tested as Marty (Jack Deam) pledges to rescue a Brazilian housemaid from her life of servitude, then plucks up the courage to propose to Kelly (Sally Carman), only to find his big moment trumped by a letter from his kids in Spain.

There's an alarming lack of action between the sheets for Billy (Michael Taylor) and Mimi (Tina Malone); the pressure's on for Letitia (Kira Martin) to lose her V plates, Gloria begins another scandalous affair and Avril and Jackson's relationship heads for the rocks.

And it all climaxes in death, murder, incest and kidnapping - another day at the orifice for our Manc heroes.

So tune in to the not so green and pleasant pasture that is the notorious Chatsworth Estate, to see more shocking antics from Frank and his scurrilous crew. Be surprised, scandalised and entertained by the longest running, multi award-winning show, Series 10 out on DVD from 20th May 2013.

HotDVDBDDIGITAL
With stunning revelations, glamorous journeys, and the arrival of the Jazz Age, Downton Abbey: A New Era, released on DVD and Blu-ray 15th August 2022 from Warner Home Video, will be the Crawleys' biggest adventure yet as they grapple with their future and new intrigue about ... END_OF_DOCUMENT_TOKEN_TO_BE_REPLACED
Top PicksView