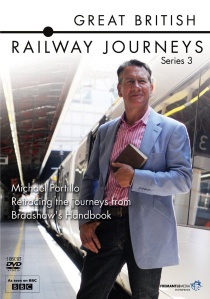 Former Minister of State for Transport Michael Portillo is back, taking to the tracks in Series 3 of the hugely popular BBC documentary TV series Great British Railway Journeys. Released by FremantleMedia Enterprises as a 5 disc set on 21st January 2013, it features all 25 half-hour episodes from the third series.

Passionate about trains, Michael Portillo embarks on 5 epic rail journeys, each split into five 'legs' or installments travelling the length and breadth of the UK and Ireland as he retraces routes that were first documented in the early 1840s in the monthly railway guide, Bradshaw's Handbook. Along the way he witnesses all the things that have changed since the early days of rail transport and what of Bradshaw's Britain remains, discovering the effect the railways had on the public and finding out how the British love of trains all began.

Over the course of the five fascinating journeys - Great Yarmouth to Embankment (Great Yarmouth to Beccles, Darsham to Felixstowe, Sudbury to Southend, Epping to Hackney, Fenchurch to Embankment); Windsor to Portland (Windsor to Didcot, Reading to Alton, Winchester to Isle Of Wight, Brockenurst to Poole, Wareham to Portland); Oxford to Milford Haven (Oxford to Pershore, Hartlebury to Great Malvern, Lydney to Newport, Cardiff to Brecon, Port Talbot to Milford Haven); Berwick-Upon-Tweed to Snaefell (Berwick-Upon-Tweed to Morpeth, Bardon Mill to Wigton, Cockermouth to Eskdale, Kirkby-in-Furness to Lancaster, Heysham to Snaefell); Bray to Londonderry (Bray to Dublin, Enfield to Drogheda, Dundalk to Portadown, Belfast to Whitehead, Ballymoney to Londonderry) - Michael discovers the grave robbing history of Great Yarmouth, uncovers the gruesome details of the first murder on a train and drinks a Victorian brew drawn from the pure waters of Cockermouth. He also takes a white knuckle walk over the Carrick-a-Rede rope bridge, finds out the secrets behind Kirkby's famous blue slate and rides one of the world's first electric railways. 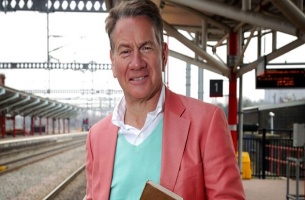 HotDVDTV
Passionate about trains, Michael Portillo continues to chart the great British romance with the railways as the phenomenally successful series Great British Railway Journeys returns to DVD for a 10th series on 6th May 2019 from Network. END_OF_DOCUMENT_TOKEN_TO_BE_REPLACED
Comments
DVD Releases News Pick