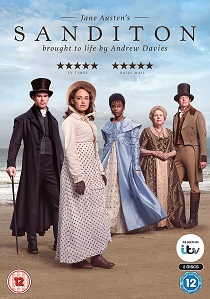 Inspired by Jane Austen's unfinished final novel, Sanditon depicts a developing Regency seaside town at the forefront of the great social and economic changes of the age. It tells the story of the joyously impulsive, spirited and unconventional Charlotte Heywood and her spiky relationship with the humorous, charming (and slightly wild!) Sidney Parker.

When a carriage accident introduces Charlotte to the Parker family, she embarks on a journey from the only home she has ever known to the seaside idyll of Sanditon. Carried along by the enthusiasm of entrepreneur Tom Parker for the development of the once small fishing village into a fashionable seaside resort, Charlotte quickly finds herself at the heart of a diverse and unexpected community. With the arrival of a wealthy mixed-race heiress, and Sidney Parker with his fashionable friends from London, Charlotte must learn for the first time to navigate the complex social structures evident in the town. The twists and turns of the plot expose the hidden agendas of each character, while Charlotte discovers herself and ultimately finds love.