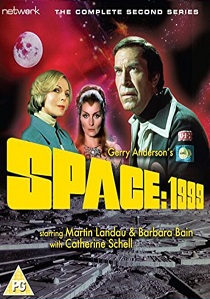 A nuclear waste dump on the moon unexpectedly detonates, blasting the moon out of orbit and taking the inhabitants of Moonbase Alpha on a fantastic voyage of discovery to the stars, fraught with danger at every turn.

Long awaited, this second series Gerry Anderson's cult sci-fi series is presented here as a stunning High Definition restoration for the very first time. All 24 episodes, presented here in their original 1.33:1 aspect ratio with optional original mono or new 5.1 soundtracks, are featured alongside a wealth of special features

Space: 1999 - The Complete Second Series is released on DVD and Blu-Ray on 28th September 2015, courtesy of Network.