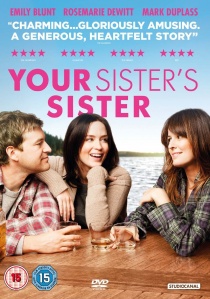 Following the success of her Sundance award winning film Humpday, Lynn Shelton weaves another compellingly human story in Your Sister's Sister, out to own on DVD and Blu-Ray on 29th October 2012 from StudioCanal.

Lost in an emotional slump one year after his brother's death, Jack (Mark Duplass) takes his best friend Iris (Emily Blunt) up on her offer for a reflective week of solitude at her family's remote island retreat.

Upon arriving at the house, Jack discovers that Iris' sister Hannah (Rosemarie Dewitt) had the same idea and the two spend an awkward evening together. Iris shows up the next morning unannounced, setting in motion boundless revelations, complicated secrets and an emotionally twisted tale of siblings and best friends and loyalty and love.

Opening to rave reviews upon its nationwide cinema release earlier this year, Shelton once again honestly explores the complexities of interpersonal relationships while gently poking fun at her characters' predicaments.

DVD
In The Undoing, released on DVD and Blu-ray 22nd March 2021 from Warner Home Video, a chasm opens up in the seemingly perfect life of a successful therapist: a violent death, a missing spouse, and a ... END_OF_DOCUMENT_TOKEN_TO_BE_REPLACED
Top PicksView