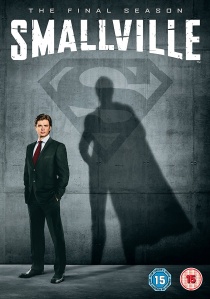 Watch Clark Kent come of age as the tenth and final season of Smallville is released on DVD and Blu-ray alongside the Complete Season 1-10 Box Set on 31st October 2011 from Warner Home Video.

Over the past ten years, Smallville has explored Clark Kent's teen years in a recognisable real-world setting, dealing with angst and conflict as he struggles to find his true identity. Season One reveals Clark's alien origins and his arrival on Earth. Key storylines from the complete box set include; Clark's discovery of his Kryptonian heritage, battles with nemesis Brainiac in his attempts to release General Zod, the arrival of Krytonian cousin Kara, archenemy Lex Luthor discovering Clark's secret and battling with Davis Bloome aka Doomsday.

Following on from the climatic end of Season 9, Season 10 opens with Clark Kent awakening from his near-death experience, haunted by the ghosts of his past, both friend and foe. Given a new lease of life, Clark must find a way to rid himself of every last temptation and become the beacon of hope the world needs as he becomes Superman. But a very real threat from Clark's past has returned to challenge his ascent, causing him to question the nature of his crusade.

Lois Lane will face her own crisis of meaning, trying to redefine her place in the world now that she knows Clark's super secret, but Clark won't discover that she knows and that's the way Lois wants to keep it. Lois will try her best to keep the mild-mannered reporter at arm's length in the hope that a life free of romantic complications will make him a better hero.

It's time for Clark Kent to say goodbye to Smallville and face his destiny as Superman, when this interpretation of the legendary DC Comics superhero reaches its dramatic finale.