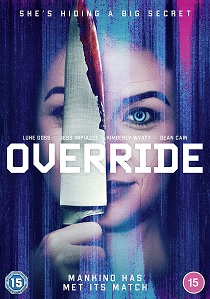 Ria (Jess Impiazzi) is a young woman who finds herself reliving the same day over and over.

Each day Ria wakes up to her normal routine but finds a different person playing her husband 'Jack' by her side. Why? Because Ria is actually the star of her own reality show A Day With Ria. Each husband is a contestant, there to show the world what they are made of.

Ria re-lives her perfect 1950's housewife day over and over again, until one day her routine becomes tiresome and Ria holds the current Jack (Charlie Clapham) to ransom.

This Jack also happens to be the Vice President (Dean Cain) of the USA's son. These dramatic turns of events mean the public discover the true massive conspiracy behind Ria, her husband(s) and one man's (Luke Goss) secret vendetta against the Vice President.

Override is released on DVD 6th September 2021 from 4Digital Media.

HotDVDBDUHD
An action thriller unlike any other, a young getaway driver relies on the beat of his personal soundtrack to be the best in the game in Baby Driver, the newest explosion of genre-crossing excitement from writer-director Edgar Wright, released on 4K Ultra HD, Blu-ray and DVD ... END_OF_DOCUMENT_TOKEN_TO_BE_REPLACED
Top PicksView