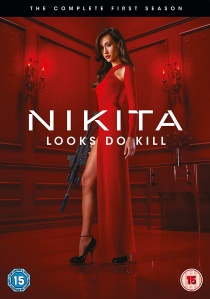 Cult assassin Nikita has gone rogue and is more determined for revenge than ever in the action packed Nikita Season One out on Blu-ray and DVD on 19th September 2011 from Warner Home Video. The fast paced TV series remake follows the success of French film Nikita (1990), Point of no Return (1993) and previous series La Femme Nikita (1997).

Division is an ultra-secret government agency whose operatives are recruited young people with severed ties to family, friends and society. Trained to be invisible assassins, no one ever leaves Division - except the charming and deadly Nikita, who has managed to escape, making it her mission to undermine the now-corrupt organization. A force to be reckoned with, the rogue Nikita taunts Division, staying on their radar, but always one step ahead.

As determined as Nikita is to bring down her former agency, there are those just as determined to stop her, including Division's newest recruit Alex played by Lyndsey Fonseca (Hot Tub Time Machine, Kiss Ass), a beautiful young woman who seems destined to replace Nikita as their next top operative.

Escape the clutches of Division and fight back with Nikita: Season One with its white-knuckle action and bursting fight scenes; don't miss this year's must-have action Blu-ray and DVD.

UHD
Based on the global blockbuster videogame franchise from Sega, Sonic The Hedgehog, released on DVD, Blu-ray and 4K UHD from 8th June 2020 from Paramount Home Entertainment, tells the story of the ... END_OF_DOCUMENT_TOKEN_TO_BE_REPLACED
Top PicksView