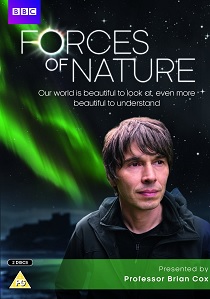 After journeying around the Solar System and out to the edges of the Universe, Professor Brian Cox takes viewers on a grand tour of Earth to reveal how our planet isn't just beautiful to look at, it's even more beautiful to understand. In four stunning programmes he unveils how a few laws of nature create the seemingly infinite and magnificent complexity that surrounds us.

Seeking out the most astonishing sights on Earth, Forces of Nature, released on DVD and Blu-ray by BBC Worldwide on 1st August 2016, takes the spectacle of our planet as you've never seen it before and combines it with the beautiful elegance of physics.

It answers some of those eternal questions like "why is water blue?", "why are honeycombs hexagonal?" and "why don't we feel the Earth spinning?", taking viewers on an inspirational, revelatory journey around our planet and beyond.