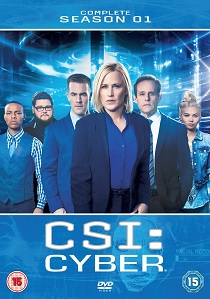 The series follows an elite team of FBI Special Agents from the FBI Cyber division, based in Washington D.C., tasked with investigating cyber crimes in the US - internet-related murders, cyber theft, hacking, blackmail, and any other crime deemed to be cyber-related comes under its jurisdiction.

Phones, computers, games consoles, any electronic device can be used by a criminal to aid and abet in their illegal activities but that technology is also the key to catching them and it is up to the Cyber division to always be one step ahead.

This exciting new series is based on the real-life work of Mary Aiken, a pioneering cyber-psychologist, and brings the traditional CSI forensic techniques forward into the 21st century and beyond.

CSI: Cyber Season 1 is released on DVD by Entertainment One on 27th June 2016

BD
Finding praise from critics around the world, Boyhood, following the life of Mason, from early childhood to his arrival at college, is released on Blu-ray and 4K UHD 27th March 2023 from Arrow Films. END_OF_DOCUMENT_TOKEN_TO_BE_REPLACED
Top PicksView