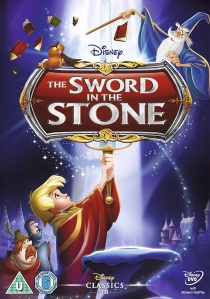 The Sword in the Stone: 45th Anniversary Special Edition (1963)

This summer, rejoin the captivating characters Arthur, Merlin the magician and the highly educated owl, Archimedes, in a magical historical adventure! Originally released on Christmas Day 1963, this legendary Disney classic, set in medieval England, is based on the Legend of King Arthur. Disney's 18th animated classic, The Sword in the Stone, was produced by Walt Disney and was the last animated feature released while he was still alive.

The tale begins after the good King of England has died, and no-one could decide who should rule the land. A miracle appeared in London to prevent argument; a sword embedded in a stone with the engraving "Whoso Pulleth Out the Sword of the Stone and Anvil, is Rightwise King Born of All England". Many tried, and failed, to pull the sword from the stone, and the challenge was soon forgotten as England slipped into a dark age without a ruler.

Many years later, the wise wizard Merlin receives a very important visitor, an unassuming orphan boy; Arthur ("Wart"). Seeing great potential in the child, Merlin commits himself to Wart's education which includes reading, science, and magical transformations! Through trials, tribulations, magical mishaps and misadventures involving the evil Mad Madam Mim, Arthur starts to grow into the brave man he will become, until one day he finds the Sword in the Stone...

The Sword in the Stone: 45th Anniversary Special Edition DVD is crammed with bonus features including an all-new game; Merlin's magical academy, animated shorts, sing-along versions of the Oscar®-nominated songs from the film and lots, lots more. Prepare to be spellbound when Disney's magical masterpiece The Sword in the Stone is released on special edition DVD on 18th August 2008. Available for a limited time only.