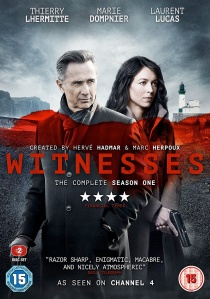 All six episodes from the first season of the French crime drama Witnesses is released on DVD and Blu-ray by Arrow Films on 11th May 2015.

Desecrated graves, dead bodies dug up and left in model homes... Every time, the same ritual: a woman, a man, a teenager, who weren't related but who form a new family. Amid the bodies, a photo: the one of Paul Maisonneuve, a Crime Squad legend in the North of France, now retired but forced to return to duty. Who is digging up the bodies? Who is leaving them in model homes and why?

Young female detective Sandra Winckler, in charge of the case, must work with Paul Maisonneuve to find out just who is behind these macabre stage settings. During her investigation, she will have to delve into Paul's past, believing him to know more than he lets on. Because that's where the truth must lie: somewhere in Paul's past. For the detective and the ex-cop, life will never be the same... For in the shadows, is a man who will stop at nothing to gain his revenge a long planned out revenge.

DVD
Will Smith and Martin Lawrence are back on the case in the roles that launched the dynamic duo to global superstardom in Bad Boys For Life, arriving on DVD, Blu-ray and 4K UHD 25th May 2020 from Sony ... END_OF_DOCUMENT_TOKEN_TO_BE_REPLACED
Hot PicksView