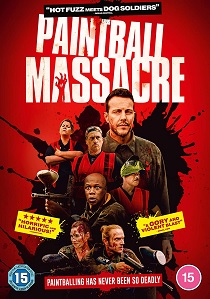 When a group of old school friends from Mass Acre Prep School are reunited after 10 years at a country pub, everything is not quite as it seems. The old history between the group still haunts them to this day and their friendships are not the same. After their night of partying they take part in an organised paintball trip, which is ran by three smug marshals, Shelley (Katy Brand), Eddie (Robert Portal) and Gary (Paul Holbrook). This puts them in the middle of nowhere, at an abandoned quarry miles away from civilisation. The barman (Nicholas Vince) warns them about the horror they could face in the quarry, but they do not listen. One friend is a no show, leaving them with only one option to recruit a school acquaintance Jessica (Cheryl Burniston) whom they don't trust to join their team.

Brutally loosing every game in spectacular fashion, they are determined to win the final game "Capture the fort" against the tough rival team "The Infidels" but this does not go according to plan. While storming the fort they are faced with more than they bargained for. Blood has now been drawn on the paintball battlefield and it is clear to them there is a cold-blooded masked killer on the loose. With nowhere to run or hide, they decide to make their way back to basecamp to try and call for help. Finding their friend murdered along the route, they now know the killer is out to slaughter them all.

DVDTV
06/04/2021
The BAFTA-winning hit Unforgotten, released on DVD 26th April 2021 from BBC Worldwide, returns for a fourth series, as Cassie and Sunny investigate a cold case with alarming links to the police force.