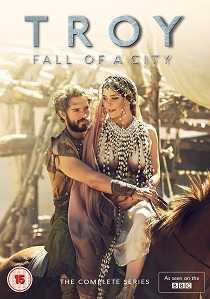 This eight-part retelling of the fall of Troy sweeps back to the judgement of Paris, his scandalous love affair with Helen and the ill-starred prophecy surrounding his birth. When the baby Paris is born, the omens foretell that he will bring about the downfall of the city. Queen Hecuba and King Priam are forced to choose whether to abandon their newborn son to the wolves or save him, but risk the safety of their kingdom. Their choice will decide not only the fate of their child, but the very existence of Troy. Told from the perspective of the Trojan royal family at the heart of the siege, the story's main themes are love, intrigue, betrayal and belonging.

Louis Hunter (The Fosters) and Bella Dayne (Humans) will star as Paris and Helen, the lovers whose passionate affair plunges Greece and Troy into war. David Threlfall (Shameless) is Paris father, King Priam of Troy, alongside Frances O Connor (The Missing) as Hecuba, Queen of Troy, and Tom Weston-Jones (Dickensian) as their eldest son Hector.

Game Of Thrones Joseph Mawle plays as Odysseus; Chloe Pirrie (War & Peace) is Andromache; Johnny Harris (This Is England 86-90) is Agamemnon; David Gyasi (Interstellar) is Achilles; and Jonas Armstrong (Ripper Street) plays Menelaos, the King of Sparta whose marriage to Helen is destroyed when Paris arrives in his city.

Troy: Fall of a City is released on DVD and Blu-ray 9th April 2018 from Spirit Entertainment Limited.