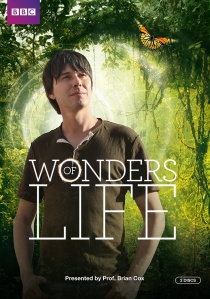 NewsTV SeriesBBC
News Article Go back to homepage
In Wonders of Life, released on DVD and Blu-Ray on 4th March 2013 by BBC Worldwide, Professor Brian Cox tells the story of the origins and history of life, from the fundamental laws which govern its creation, to the myriad species that populate our planet.
Brian Cox
Paul Olding, Michael Lachmann, Stephen Cooter, Gideon Bradshaw
Stephen Cooter, Andrew Cohen, Suzy Boyles, James Van Der Pool
2entertain
29 minutes
04/03/2013
Thank you for supporting DVD365.net when you order using the link(s) below. As an Amazon Associate we earn from qualifying purchases
Buy DVD
Buy BD
Information

In Wonders of Life, released on DVD and Blu-Ray on 4th March 2013 by BBC Worldwide, Professor Brian Cox tells the story of the origins and history of life, from the fundamental laws which govern its creation, to the myriad species that populate our planet.

This beautiful and definitive series reveals how, 3.7 billion years ago, basic scientific laws gave birth to the most complex, diverse and unique force in the universe - life. Professor Brian Cox reveals how light, gravity, time, matter and energy became the building blocks of everything, from the smallest microbe on Earth to the biggest galaxy.

Wonders of Life tells the story of the amazing diversity and adaptability of life through the laws that govern it: from the dance of chromosomes as cells divide to the spark of electricity that causes muscles to move. Visiting spectacular locations including the flooded Taal Volcano on the Philippine island of Luzon, the Australian outback and the Borneo rainforests, it uncovers the secrets of life in the most unexpected locations and poses the question: could the conditions for life be repeated elsewhere in the universe?

Related Articles
Rise Of The Planet Of The Apes, Medici: Masters of Florence, Churchill, The Autopsy of Jane Doe, Forsaken, War and Peace, The Game, Human Universe, Blood, As Good As Dead, Exit Humanity, The Slap, Manhunter: 25th Anniversary Edition, Wonders of The Universe, The Sinking Of The Laconia, The Day Of The Triffids, The Water Horse: Legend of the Deep, Zodiac, Running with Scissors, The Bourne Identity: Special Edition, The Bourne Identity, The Bourne Supremacy, The Corruptor, The Ring : Collectors Edition, The Ring, Super Troopers, The X-Men 2, The Planets, Succession: Season 2, The Bay of Silence, Last Moment of Clarity
Forces of Nature, Wonders of The Universe
Wonders of The Universe
Inside The Human Body
Comments
DVD Releases News Pick

DVD
A 13-year-old girl named Meilin turns into a giant red panda whenever she gets too excited in Disney and Pixar's 25th feature film Turning Red, released on DVD, Blu-ray and 4K UHD 2nd May 2022 from Walt Disney Home ... END_OF_DOCUMENT_TOKEN_TO_BE_REPLACED
Top PicksView