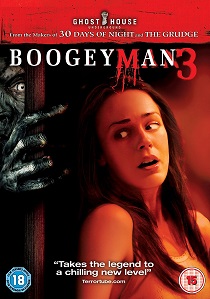 Icon Home Entertainment is pleased to announce the 27th April 2009 DVD release of the third installment of the popular horror franchise Boogeyman 3. Bonus materials include deleted scenes and three featurettes.

When psychology student, Sarah Morris (Erin Cahill), witnesses the alleged suicide of her roommate, it sets into motion a series of horrific events that cause her to fear the supernatural entity. As she tries to convince the rest of her dorm that the Boogeyman does exist, the evil force grows stronger and her friends begin to pay the price. Now she must stop this ultimate evil before the entire campus falls prey.

HotDVDBD3D-BDUHD
The grave course of events set in motion by Thanos that wiped out half the universe and fractured the Avengers ranks compels the remaining Avengers to take one final stand in Marvel Studios', Avengers: Endgame, released on DVD, Blu-ray, 3D Blu-ray and 4K-UHD 2nd September ... END_OF_DOCUMENT_TOKEN_TO_BE_REPLACED
Top PicksView