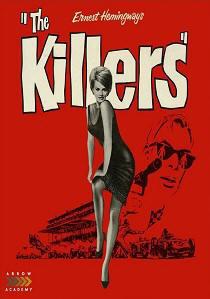 Arrow Films' Arrow Academy label is pleased to announce the release of The Killers, coming to Blu-ray for the first time in the UK on 24th February 2014. One of the first post-noir movies, The Killers is a sizzling sun-drenched thriller packed with shadows where the darkness at the heart of its protagonists' souls is allowed to rot in the heat of the day. Probably best known as the film which was originally intended to be the first TV movie, but pulled by broadcasters due to what was seen as overtly graphic violence, The Killers, most importantly, is the film which established Lee Marvin: achingly cool, unnervingly relaxed and physically daunting.

This feature-packed disc will be released as a deluxe Blu-ray featuring original and newly commissioned artwork, an archive interview with director Don Siegel, new and exclusive interviews with Dwayne Epstein, author of 'Lee Marvin: Point Blank' and Marc Eliot, author of 'Ronald Reagan: The Hollywood Years', alongside an exclusive collector's booklet featuring new writing on the film by Mike Sutton, extracts from Don Siegel's autobiography and contemporary reviews.

Here for the first time on Blu-ray, Arrow Academy is proud to release the film in both the alternate wide-screen framing (1.85:1) and the more commonly seen 1.33:1/4:3 version. The Killers was originally commissioned as the first American TV movie, though it was intended from the outset to be released in European cinemas. However, following the JFK assassination, NBC became nervous about the film's subject matter, and the film debuted in American cinemas instead. But because of the original plans, previous video releases have treated The Killers as a TV movie and framed it at the then-universal TV shape of 1.33:1/4:3.

There is more than one way to kill a man...

"I gotta find out what makes a man decide not to run. Why all of a sudden he'd rather die."

Loosely inspired by the Ernest Hemingway story, and directed by Don Siegel (whose many other taut, efficient thrillers include Dirty Harry and the original Invasion of the Body Snatchers), The Killers was commissioned as the very first 'TV movie', but was given a cinema release because of its violence - although a cast like that really belonged on the big screen in the first place.

This super-deluxe package will be full of special features and bonus material including: