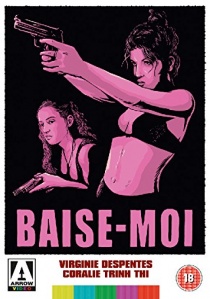 NewsHorror
News Article Go back to homepage
Sex and shooting assault the senses in Baise-moi, released on DVD on 25th March 2013 by Arrow Video, a bloody buddy movie that's like Thelma and Louise on acid. Banned on release in France, the film has provoked as much horror as it has debate.
Tewfik Saad, Christophe Claudy Landry, Adama Niane, Céline Beugnot, Raffaëla Anderson, Karen Lancaume
Coralie, Virginie Despentes
Philippe Godeau, Dominique Chiron
Arrow Video
1 hour 17 minutes
25/03/2013
Thank you for supporting DVD365.net when you order using the link(s) below. As an Amazon Associate we earn from qualifying purchases
Buy DVD
Information

Sex and shooting assault the senses in Baise-moi, released on DVD on 25th March 2013 by Arrow Video, a bloody buddy movie that's like Thelma and Louise on acid. Banned on release in France, the film has provoked as much horror as it has debate.

Directed by Virginie Despentes, Coraline Trinh Thi and starring Raffaëla Anderson, Karen Lancaume and Céline Beugnot, one of the most controversial movies of the last 20 years, Baise-moi was described as the most sexually explicit film to ever reach British screens by the UK press, the film offers the complacent viewer a cinematic slap in the face.