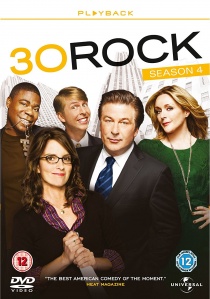 30 Rock, the Emmy and Golden Globe-winning smash hit comedy is back with arguably its best season yet as 30 Rock: Season 4 arrives on DVD from 14th February 2011 courtesy of Universal Playback.

Starring Tina Fey (The Invention of Lying, TV's Saturday Night Live), Alec Baldwin (It's Complicated, Running With Scissors), Tracy Morgan (Death At A Funeral, Cop Out) and Jane Krakowski (Ally McBeal, Go), 30 Rock: Season 4 continues to take a peek behind the normally closed doors and follow the crazed team responsible for putting together The Girlie Show With Tracy Morgan. Season 4 sees Liz Lemon (Fey) as neurotic as ever and yet somehow the calm at the eye of the storm when compared to her boss, Jack Donaghy (Baldwin) and the rest of the team.

Famed for its roster of incredible A-list guest stars, 30 Rock: Season 4 ups the ante again, with cameos coming in thick and fast from Hollywood's finest, including Julianne Moore, James Franco, Elizabeth Banks, Michael Sheen, Jason Sudekis, John Hamm, Rip Torn and Matt Damon. Highlights from the series include Liz (Fey) starting her own talk show called "Dealbreakers", Tracy (Morgan) attempting to win an Emmy, a Grammy, a Oscar, and a Tony (an accomplishment known as an EGOT), and Jenna (Krakowski) auditioning for Gossip Girl as a college freshman, not realising she's actually up for the role of her mother.

With extras including a selection of hilarious audio commentaries, specially extended episodes and eye-opening behind the scenes featurettes, 30 Rock: Season 4 is exactly what fans have been crying out for and more. Also available on DVD is 30 Rock: Season 1-4 as a box set, so there's no excuse not to catch up on all the gags from across the pond!

UHD
Based on the global blockbuster videogame franchise from Sega, Sonic The Hedgehog, released on DVD, Blu-ray and 4K UHD from 8th June 2020 from Paramount Home Entertainment, tells the story of the ... END_OF_DOCUMENT_TOKEN_TO_BE_REPLACED
Hot PicksView