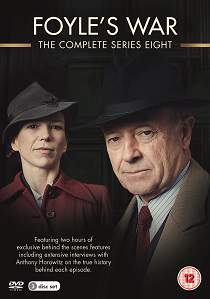 Michael Kitchen returns to the screen as the inimitable Detective Chief Superintendent Foyle in a brand new series which finds him working with MI5 after the Second World War. It will air on ITV in January 2015 followed by its DVD release 19th January 2015 courtesy of RLJ Entertainment's Acorn Label.

Foyle is a man of scrupulous integrity who, having survived the First World War and solved crime in the Second, now finds himself working with MI5 to keep the country safe, while bringing justice to those who deserve it. The series comes to DVD as a bumper three-disc set on 19th January 2015, complete with two hours of exclusive behind the scenes features including extensive interviews with Anthony Horowitz on the true history behind each episode. The new series consists of three powerful new films:

With the success of previous series, Foyle's War continues to boast staggering audiences. On DVD, the show has achieved fantastic results with sales in excess of one million units, a testament to its watchability and incredible popularity.

HotDVDBD
With a 4K restoration supervised and approved by director Richard Kelly, one of the most talked-about films of the last twenty years, Donnie Darko, is being re-released in dual-format DVD and Blu-ray from Arrow Video on 12th December 2016. END_OF_DOCUMENT_TOKEN_TO_BE_REPLACED
Hot PicksView