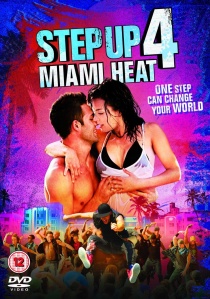 Be transported into the world of street dance as Universal Pictures (UK) releases Step Up 4: Miami Heat on 3D Blu-ray, Blu-ray and DVD on 3rd December 2012.

Set against the hot and sultry backdrop of sizzling Miami the newest installment in the smash-hit Step Up franchise oozes more energy, sexual tension and hot bodies than ever before. Directed by Scott Speer and produced by Jon M. Chu (Step Up 3D, Justin Bieber: Never Say Never) the film is bursting at the seams with stunning routines set to some of the years hottest tracks from Jennifer Lopez, Fergie and Timbaland.

When Emily (Kathryn McCormick, So you Think You Can Dance) arrives in Miami with aspirations of becoming a professional dancer she soon falls in love with Sean (Ryan Guzman), a young man who leads an elaborate and cutting-edge dance crew, "The Mob". When a wealthy business man threatens to develop The Mob's historic neighborhood and displace thousands of people, Emily must band together with Sean and The Mob to turn their performance art into protest art and risk losing their dreams to fight for a greater cause.

The dance spectacular will be available on 3D Blu-ray which means everyone can experience this eye popping adventure in full 3D. Catch the "The Mob" as they take the Miami streets by storm and perform incredible moves in this dance revolution.

HotBDUHD
Sweeping the 60th Academy Awards and winning nine Oscars including Best Picture and Best Director, The Last Emperor arrives on Blu-ray and 4K UHD 13th February 2023 from Arrow Films in a brand new 4K restoration that will take your breath away. END_OF_DOCUMENT_TOKEN_TO_BE_REPLACED
Top PicksView