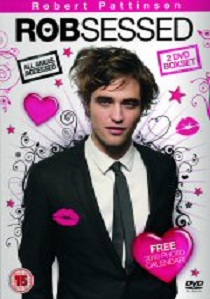 News
News Article Go back to homepage
Voted the Sexiest Man in the World by Glamour Magazine, Robert Pattinson is one of Hollywood's Hottest Heartthrobs today! To celebrate his success and to coincide with the launch of Twilight 2 in cinemas, Revolver Entertainment are releasing the exclusive Robsessed Boxset on DVD on 23rd November 2009.
Robert Pattinson
Unknown
Unknown
23/11/2009
Thank you for supporting DVD365.net when you order using the link(s) below. As an Amazon Associate we earn from qualifying purchases
Buy DVD
Information

Voted the Sexiest Man in the World by Glamour Magazine, clinching 'top male hottie' at the Teen Choice Awards and the winner of the Breakthrough Performance and Best Kiss awards from MTV Movies for his smash hit 'Twilight,' Robert Pattinson is one of Hollywood's Hottest Heartthrobs today! To celebrate his success and to coincide with the launch of Twilight 2 in cinemas, Revolver Entertainment are releasing the exclusive Robsessed Boxset on DVD on 23rd November 2009.

Following his shot straight to fame from his role as Cedric Diggory in the legendary Harry Potter and the Goblet of Fire and fresh from his second major leading role in the Twighlight Saga, the Robsessed Box Set features a the first ever behind-the-scenes access all areas documentary on the life of Robert Pattinson, plus The Haunted Airman starring the man himself in the title role. The boxset also includes the chance for fans to spend the whole year with Rob with an exclusive, free 2010 photo calendar.

Robsessed provides an insightful and fascinating view into the foundations of the making of the young British leading actor and his transition to International Superstar. The film charts the British star's flight through the ranks to International celebrity and provides the inside story that led to his world-wide fame and sex symbol status!

Robsessed includes sizzling secrets of Rob's first kiss, his bullying at school and gossip on his co-stars, featuring a great selection of interviews with his Drama teacher, past co-star Anne Reid ('The Bad Mother's Handbook'), influential figures in the showbiz industry, as well as some of his super fans! No stone is left unturned as the first ever documentary on Rob is released nationwide. Robsessed is an exclusive no-holds-barred look at Rob's background and offers more than a glimpse into his life and those closest to him.

The Haunted Airman is a chilling tale and presents one of the star's finest performances. Rob stars as wounded RAF pilot Toby Jugg, who is sent to a secluded mansion to recuperate, only to become the victim of horrifying visions and a complex conspiracy. Confined to a wheelchair and suffering terrible nightmares and visions, he suspects the methods of his psychiatrist, Dr Hal Burns. His beautiful aunt, Julia, seems to be the only person he can trust - until circumstances make him doubt even her intentions.

Classic and well crafted, The Haunted Airman is a clear demonstration of Rob's talent. The ideal gift and certainly the essential, must-own DVD Boxset for any Robert Pattinson fan, as well as a great introduction to those unfamiliar with his work. The Boxset will leave viewers amazed at his success and eager to see more from the talented star.