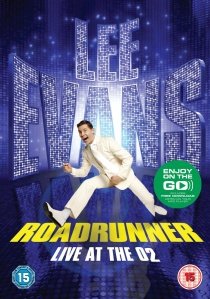 NewsStandup Comedy
News Article Go back to homepage
Following the enormous success of Wired and Wonderful, XI and Big, the incredible Lee Evans returns to entertain us from the comfort of our own living rooms with his brand new DVD Lee Evans Roadrunner - Live At The O2, released on 21st November 2011 by Universal Pictures (UK).
Lee Evans
Tom Poole
Addison Cresswell, Anthony Caveney, Andrew Beint, Grazio Abella
Universal Pictures (UK)
Unknown
21/11/2011
Thank you for supporting DVD365.net when you order using the link(s) below. As an Amazon Associate we earn from qualifying purchases
Buy DVD
Buy BD
Buy 3D-BD
Information

Following the enormous success of Wired and Wonderful, XI and Big, the incredible Lee Evans returns to entertain us from the comfort of our own living rooms with his brand new DVD Lee Evans Roadrunner - Live At The O2, released on 21st November 2011 by Universal Pictures (UK).

Filmed at the world famous 02 Arena in front of 16,000 adoring fans, Lee Evans Roadrunner - Live At The O2, is the latest DVD from the undisputable King of Comedy.

Lee's 67 arena date Roadrunner tour, which included a staggering six nights at both the O2 and Wembley Arenas, played to a sell-out 600,000 people across 16 arena stages throughout the UK and Ireland. First day sales saw an amazing 227,424 tickets sold and firmly established Roadrunner as the fastest and biggest day one selling UK comedy tour of all time.

Not only that, but also for the first time in stand up comedy history, the show will be filmed and released on DVD in full incredible 3D (release date Mon 28th Nov) . This landmark entertainment event will provide the ultimate Lee Evans experience to home audiences, perfectly encompassing his spectacular stage show and showing off all his physical hilarity.

Lee Evans' fans will not be disappointed as Roadrunner Live features his usual exasperation with the infuriating frustrations of everyday life combined with his boundless energy and unique physicality, which his legions of fans have come to expect and love. Now approaching 50, Roadrunner sees a more contemplative side of Lee where health checks have hilarious consequences and tips are given on how to survive 28 years of marriage to the 'Missus'.

Other topics dissected by Lee include his chronic inability ever to ask anyone for directions, his irritation with bankers and estate agents, food home delivery services, supermarket shopping, restaurant etiquette and today's footballers. Roadrunner culminates in typical Lee fashion with a not-to-be-missed musical number featuring a full choir and a giant glitter-ball.

Lee's manic energy, uncanny observations, hilarious delivery and side-splitting material have made his live performances a must-see for comedy fans worldwide. His tours and DVD releases year-on-year continue to smash sales and box office records. From 2002 to 2008 alone he has performed to well-over a million people through his three live arena shows (Wired & Wonderful - 2002, Xl - 2005, Big 2008). His previous DVD release in 2008 Big - Live At the 02 broke all previous stand-up DVD sales records when it sold a staggering 259,399 during its first week and became the biggest week one release for a non film DVD of all time - a record it still holds today.

Lee Evans has won many accolades in the comedy world including the highly coveted 'Perrier Award' and the Time Out Award for Comedy. He has experienced huge success as an international film star with major starring roles in There's Something About Mary (1998), The Fifth Element (1997), Mouse Hunt (1998) and Funny Bones (1995). In addition to his film work, Lee has also appeared on BBC One in his own sitcom series Lee Evans- So What Now? and was recently seen on our TV screens in 2009 when he appeared in the Doctor Who Easter special (BBC One), where he played an evil Welsh scientist, again to much critical acclaim.

During the past five years Lee has received rave reviews for his West-End theatre roles. These include; Samuel Beckett's Endgame alongside the legendary Michael Gambon, Mel Brooks' musical The Producers with Nathan Lane plus the Harold Pinter play The Dumb Waiter, with Jason Isaacs, where he received the London Theatregoers' Choice Award.