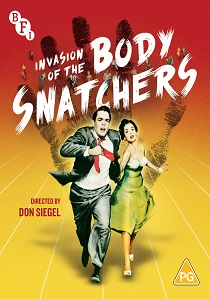 Invasion of the Body Snatchers (1956)

NewsScience Fiction
News Article Go back to homepage
Presented on Blu-ray for the first time in the UK, experience the thrills and horrors of this highly influential movie like never before as Invasion of the Body Snatchers is released 25th October 2021 from BFI.
Kevin McCarthy, Dana Wynter, Larry Gates, King Donovan
Don Siegel
BFI
1 hour 20 minutes
25/10/2021
#InvasionOfTheBodySnatchers
Thank you for supporting DVD365.net when you order using the link(s) below. As a member of the Zavvi affiliate program we earn from qualifying purchases
Buy BD
Information

When multiple residents of a Californian backwater begin to suffer from identical frenzied delusions, Dr Miles Bennell (Kevin McCarthy) suspects the town is in the grip of a new kind of epidemic. But his investigations soon reveal the terrifying truth, uncovering not a medical emergency but an extra-terrestrial invasion that threatens mankind's very existence.

Directed by Don Siegel (Dirty Harry), this 1950s classic brings the fear of the unknown to the streets of America. A milestone of the science-fiction genre and a critique of post-war American society, The Invasion of the Body Snatchers remains an enduring and suspenseful classic.

Released 25th October 2021 by BFI and presented on Blu-ray for the first time in the UK, experience the thrills and horrors of the highly influential Invasion of the Body Snatchers like never before.

DVD
Catherine finally takes the Russian throne for her own - but if she thought coup-ing her husband was difficult, it's nothing compared to the realities of liberating a country that doesn't want to be in The Great: Season Two, ... END_OF_DOCUMENT_TOKEN_TO_BE_REPLACED
Top PicksView