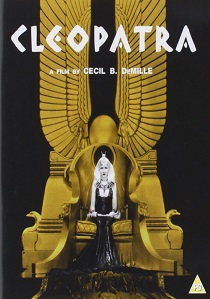 News
News Article Go back to homepage
Lavishly produced with some of the most inspired waxing-moon photography and unwholesome set-design to come out of the studio system, The Masters of Cinema Series is proud to present Cleopatra for the very first time on Blu-ray, in a Dual Format edition, released in the UK on 24th September 2012.
Gertrude Michael, Ian Keith, Joseph Schildkraut, Henry Wilcoxon, Warren William, Claudette Colbert
Cecil B. DeMille
Cecil B. DeMille
Eureka Entertainment Ltd
1 hour 40 minutes
24/09/2012
Thank you for supporting DVD365.net when you order using the link(s) below. As an Amazon Associate we earn from qualifying purchases
Buy DVD
Buy BD
Information

A pre-code film that sneaked onto screens just as the censorious Hays Office began cracking down on Hollywood's racier propositions, Cleopatra is a libertine paean to decadence and depravity that can still send a viewer's mind reeling and pulse thumping - all courtesy of the Golden Age's swampiest psychosexual auteur, Cecil B. DeMille (The Ten Commandments; The Greatest Show on Earth; The King of Kings).

Claudette Colbert (It Happened One Night; The Palm Beach Story; Drums Along the Mohawk) presides over the most outrageous spectacle this side of The Scarlet Empress as the eponymous pharaoh queen who speeds from Julius Caesar (Warren William) to Marc Antony (Henry Wilcoxon), from Egypt to Rome, from war-room to bedroom... The whiff of incense permeates every scene, with each connected to the next in a veritable matrix of whips, blindfolds and bindings - the cazed arrangement laying bare all the fetish inklings of the moving-picture dream.