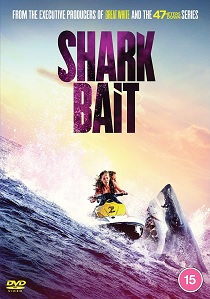 NewsHorrorThriller
News Article Go back to homepage
In Shark Bait, released on DVD 6th June 2022 from Altitude Film Distribution, A group of friends enjoying a weekend steal a couple of jetskis racing them out to sea, ending up in a horrific head-on collision, while from the waters below predators lurk.
Holly Earl, Jack Trueman, Catherine Hannay, Malachi Pullar-Latchman, Thomas Flynn
James Nunn
Nadine Luque, Andy Mayson, Andrew Prendergast, Chris Reed
Altitude Film Distribution
1 hour 27 minutes
06/06/2022
#SharkBait
Thank you for supporting DVD365.net when you order using the link(s) below. As an Amazon Associate we earn from qualifying purchases
Buy DVD
Information

This edge-of-your-seat nerve-shredder, from the producers of 47 Metres Down, Attack The Block and Boss Level, sees a group of spring-breakers being terrorised by a fearsome predator off the coast of Mexico.

Director James Nunn (Tower Block, Eliminators) delivers an adrenaline rush of a film packed with seriously intense set pieces, with a taut, twisting script from Nick Saltrese (who wrote the acclaimed and award-winning prison boxing film A Prayer Before Dawn). We dare you to watch it with your toes on the floor!

The fantastic cast includes Holly Earl (from the TV series Humans), Catherine Hannay (Doctors), and Malachi Pullar-Latchman (soon to be seen as D'Artagnan in The Three Musketeers), who discover, too late, that their hi-jinks are going to have serious consequences. With an excellently ominous score by Clio award-winning composer Walter Mair (The Heist No One Is Talking About), and stunningly shot by Ben Moulden (All My Friends Hate Me), Shark Bait is a slick, highly-effective scare machine. Remember - once you see it, it's too late...

A group of spring-breakers enjoying a weekend in Mexico. After a big night of partying on the beach until dawn, the friends steal a couple of jet skis and take them out to sea, but end up in a horrific head-on collision. The group finds itself stranded miles from land and struggling with a badly injured friend.

With no clear way home and predators circling in the choppy waters below, the true horror begins...