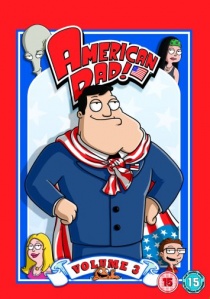 Take a trip down to the metropolitan area of Washington DC's Langley Falls, and join number one Dad and CIA Agent Stan Smith and his crazy dysfunctional family as they return for Volume 3 of American Dad, the hilarious series from 'Family Guy' creator Seth MacFarlane. The DVD box set arrives on 12th May 2008 from Twentieth Century Fox Home Entertainment.

This new volume follows the random antics of this outrageous family as they entangle themselves in ever more ridiculous situations. From Stan's sweet trophy wife Francine to his socially awkward pre-teen son Steve; along with his ultra-liberal daughter Hayley, and let's not forget Roger, the alcoholic Extra Terrestrial rescued from Area 51, and Klause, the lascivious German-speaking goldfish!

Stan (Seth MacFarlane) will stop at nothing to fight for what he thinks is right for his country and his eccentric family. He works for the CIA and is consistently on the alert for terrorist activity. This proud family man and undisputed 'Weapons Expert' will go to any extremes to protect people. However he is often keeping the homeland secure, whilst alienating his family and terrorizing the neighbours in the process. Stan will do whatever it takes to ensure domestic tranquillity and make the world safe for democracy of the ultra-right-wing variety!

Stand out episodes include Bush Comes to Dinner in which Stan wins a contest to have his hero, President Bush over for dinner, where Hayley tries to grill him over the Iraq war, and Steve and Roger try to convince him that they have found Bin Laden. Bush ends up getting drunk and Stan tries to save him from public humiliation. In the episode The 42 Year Old Virgin' Stan is playing poker with the guys, and is uncovered as a virgin, but not in the traditional way, but that he's never killed anyone! Roger and the guys set out to help him bust his killing cherry!