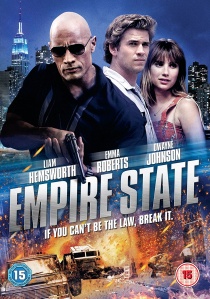 Directed by Dito Montiel (Fighting) and starring Liam Hemsworth (The Hunger Games) and Dwayne "The Rock" Johnson (Fast & Furious 6) Empire State is based on the true story of one of the largest cash heists in U.S. history. This nerve-shredding action thriller will be available to own on Blu-ray, DVD and Digital Download from 17th March 2014 from Lionsgate Home Entertainment.

After failing to get into the police academy, Chris Potamitis (Hemsworth) settles for a security guard job with the Empire State Armoured Truck Company. Chris makes the mistake of mentioning the company's lax security to his best friend, Eddie (Michael Angarano, Haywire) and is soon unwittingly drawn into an elaborate scheme to rob the abundant amounts of cash being stored there. As the stakes continue to rise, Chris and Eddie must outwit the veteran NYPD Detective that is hot on their trail, as well as the local crime bosses that want to know who pulled a job on their turf, or suffer the consequences.

With a stellar supporting cast including Emma Roberts (We Are The Millers, Scream 4), and Nikki Reed (The Twilight Saga franchise) Empire State is a smash and grab suspense movie to keep you on the edge of your seat.