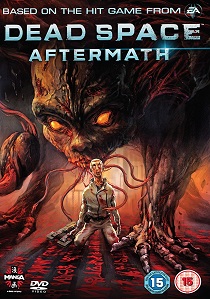 A movie double pack containing both Dead Space features: 2008's Downfall and Aftermath will also be available on the same day on Blu-ray and DVD.

Featuring the voice talents of sci-fi actors Christopher Judge (Stargate SG-1, X-Men animations) and Peter Woodward (Babylon 5, Fringe), Aftermath explodes with the very best in blood, gore and alien attacks taking the franchise to a gruesome new level and is an essential companion to the game.

Part of the trans-media Dead Space franchise, the film is based around the after-events of the first-responder mission to Aegis VII in Dead Space and provides a crucial back-story to the highly anticipated new graphic novel and game Dead Space 2. The Electronic Arts title has already received 17 awards and 40 nominations including GameSpot's "Best of E3 2010".

The year is 2509. The first-responder ship USG O'Bannon has arrived at Aegis VII, attempting to hold the planet together in the wake of the catastrophe that destroyed the Ishimura. But only four members of the O'Bannon crew have survived, and the catastrophe remains unchecked. What went wrong? What secrets do they hide? And what new threats have been revealed... in the Aftermath!

Dead Space: Aftermath is a fast paced, horrifying thrill ride told through the perspective of the four survivors by several renowned international directors, each vision unique and bold in its own way.

DVD
For the first time in the cinematic history of Spider-Man, our friendly neighborhood hero's identity is revealed in Spider-Man: No Way Home, released on DVD, Blu-ray and 4K UHD 4th April 2022 from Sony Pictures Home ... END_OF_DOCUMENT_TOKEN_TO_BE_REPLACED
Top PicksView