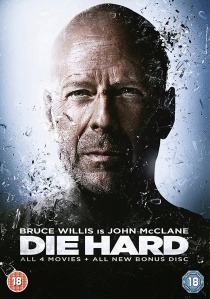 A true Hollywood superstar... One of the greatest movie characters of all time... Bruce Willis is Detective John McClane and Die Hard is the action franchise that redefined the genre for a new generation. Twentieth Century Fox Home Entertainment marks Die Hard's quarter-century anniversary with the release of the Die Hard 25th Anniversary Blu-ray Collection on 28th January 2013, touting nearly two hours of never-before-seen content.

With the latest in the franchise, A Good Day To Die Hard arriving in cinemas on February 14, now is the perfect time to re-live every awesome Die Hard moment with the latest Blu-ray box set. The collection features the first four Die Hard films in high-definition Blu-ray and an all-new bonus disc, "Decoding Die Hard". This unparalleled tribute to the tough-as-nails cop with a wry sense of humor and a knack for explosive action is available for pre-order now.

Die Hard heralded a new breed of hero and action film, where an ordinary man uses his wits and natural abilities to overcome extraordinary circumstances. From the dire situations in which John McClane is thrust, to the obstacles he must overcome, to the criminal masterminds he must take down, McClane is the essence of the Die Hard films and the reason for the franchise's enduring popularity over the years. He is the right hero for the right time!