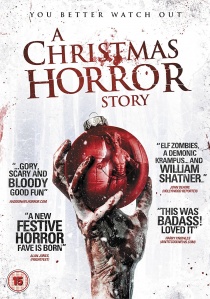 From the producers of Splice and Ginger Snaps comes the next chapter in classic Christmas horror. Genre legend William Shatner (Star Trek) narrates four interwoven stories that delve into the darker side of the festive season. Featuring an exciting young cast and amazing special effects, it's a Santa's sack-full of fun!

Christmas: a time of joy, peace and goodwill... unless you live in Bailey Downs. For some folks in this small town Christmas Eve isn't about getting together with loved ones and exchanging presents - it's a desperate fight for survival.

A perfect horror for fans of both contemporary and classic horror, it's little wonder why A Christmas Horror Story, released on DVD by Entertainment One on 9th November 2015, was specially selected as a star attraction at FrightFest 2015.

It follows in the tradition of festive horrors Silent Night, Deadly Night and Black Christmas, and with its interwoven stories puts a unique seasonal spin on the portmanteau style of horror made popular by films such as Creepshow and Asylum. William Shatner is typically brilliant as the narrator and leads a cast of up-and-coming stars, who - along with gore-tastic special effects from the team behind Cube and Resident Evil: Apocalypse - bring a dark sense of festive fun to the bloody tales.

With big laughs and even bigger scares, it's Christmas terror at its most bad-ass - the perfect gift for any horror fan this festive season! 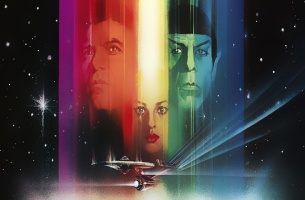 HotBDUHD
When an alien spacecraft of enormous power is spotted approaching Earth, Admiral James T. Kirk resumes command of the USS Enterprise in order to intercept it, in the big screen debut of Star Trek: The Motion Picture, ... END_OF_DOCUMENT_TOKEN_TO_BE_REPLACED
Comments
Hot Pick

HotDVDBDUHD
After more than thirty years of service as one of the Navy's top aviators, Pete 'Maverick' Mitchell is back where he belongs as Top Gun: Maverick flies onto DVD, Blu-ray and 4K UHD 31st October 2022 from Paramount Home Entertainment. END_OF_DOCUMENT_TOKEN_TO_BE_REPLACED
Top PicksView