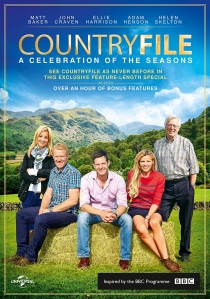 Countryfile: A Celebration of the Seasons (2014)

See Countryfile as you have never seen before in this feature-length special which sees the Countryfile team traverse the breathtaking landscape of the United Kingdom showcasing each of our beautiful seasons. Helen Skelton is in the Lake District, enjoying some of her favourite childhood activities, Ellie Harrison gets to grips with managing her Cotswold orchard, Adam Henson is on his farm in the throes of the harvest season, Matt Baker nets a Spring catch in Southport and John Craven is on the summer seas, hoping for a glimpse of one of our most mysterious marine creatures.

The DVD features 50 minutes of specially-filmed material exclusive to this release as well as almost an hour of digitally remastered highlights from the hugely popular BBC series, and further newly created bonus features. Get closer to your favourite presenters with a sneak peek at the amazing filming techniques employed, a personal visit to Helen's family farm, and also the incredible 25th anniversary episode where Countryfile celebrated its Silver Jubilee by throwing a party in the form of a traditional country Summer Fayre.

Released on 1st December 2014 by Universal Pictures (UK) on on Blu-ray, DVD, and Digital HD, Countryfile: A Celebration of the Seasons is the perfect gift for fans of the series and lovers of the great British countryside.